10 Hot Technology Products at CES 2020
Each year, the consumer electronics show, or CES, presents new technology developments across many industries.
The event is going on this week in Las Vegas, Nevada. It is a chance for companies to launch their latest products aimed at making life easier, more productive and fun.
Here is a list of some of the most interesting products introduced at CES 2020.
8K televisions
The show is always a favorite place for companies to release their latest televisions (TVs). This year was no different. Several manufactures released large models with 8K, which is considered the highest quality standard. Samsung showed off a new 8K version that brings the picture right to the edge of the TV.
A TV that acts like a phone
Samsung also introduced a TV that can be used to watch video designed for a smartphone. The Sero TV does this by turning itself from the normal TV position to an upright position that looks like the shape of a phone. The TV can connect to mobile devices to play video directly from the phone.
The TV is already for sale in South Korea for about $1,600. The company says it is designed to appeal to "the mobile generation." Samsung says it plans to expand Sero's availability "to several global markets in 2020."
Smart waste can
A company called TOWNEW presented a waste can designed for the home that does a lot of the dirty work on its own. When the can is full, the user touches a button to activate the machine's smart abilities. The device then completely seals the waste bag inside and puts a new one in place, all by itself. The can then raises its top so the user can pick up and throw away the bag.
Snore stopping pillow
People who snore when they sleep might be helped by the "Motion Pillow." This smart pillow is designed to collect information about the sleeper's head position and breathing during the night. The system then uses this data to change the shape of the pillow, with the help of built-in air bags. The idea is that by changing the pillow, the sleeper's head will move just enough to improve airflow through the nose and reduce snoring.
A sitting Segway
Segway people movers have been around for years, but the company used CES to announce its new S-Pod model. The new transporting "pod" looks like a small chair with wheels. The company says its new model is designed to be used in enclosed areas such as airports, amusement parks and shopping malls.
Phone charger and car battery saver
Mophie announced a new charging device that can wirelessly charge smartphones, and also be used to start a car with a dead battery. The Powerstation Go comes with two USB openings for device charging, as well as car battery connectors and a powerful light. 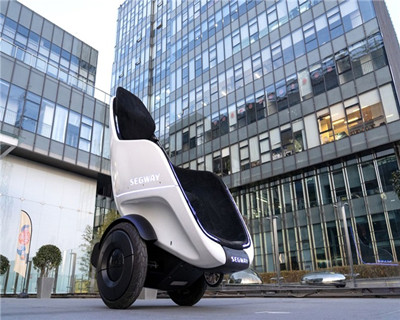 AI to block the sun
Technology company Bosch introduced several new products at CES, including its new Virtual Visor for cars. The Virtual Visor is designed to replace the traditional vehicle sun visor. The company says the system uses artificial intelligence to find the exact position of the driver's eyes. It then darkens only a small part of the car's windshield through which the sun could affect the driver's sight.
Invisible car hood
Automobile industry company Continental showed off a new technology that seems to make the front end of a vehicle disappear. Continental says the technology, called "Transparent Hood," aims to make driving safer and easier. Cameras provide video of the area underneath the vehicle, permitting the driver to see objects and road conditions that might present danger.
Virtual keyboard
Samsung provided a first look at a technology that can turn just about any surface into a device keyboard. The virtual keyboard is called "SelfieType." The system uses a device's camera to analyze finger movements as they "type" on a flat surface and shows the results on the phone. Samsung says the virtual keyboard does not require any other equipment besides a mobile device. The technology is still being tested.
Wearable air purifier
A company called Aō Air introduced a wearable air purifier. The device is designed to be a high-tech face covering to block pollution. The purifier pulls air through a filtration system and then uses fans to create a small area of clean air at the front of the device. The company says the design permits the air to be purified — without the need for a solid seal.
Toilet paper robot
And finally, personal products company Procter & Gamble presented a robot that can serve people as they use the toilet. The RollBot was described by the company's Charmin division as a "first-of-its-kind" invention. The small, self-balancing robot can be controlled by a smartphone to bring bathroom users a fresh roll of paper without ever having to leave the toilet seat.
I'm Bryan Lynn.
And I'm Dorothy Gundy.